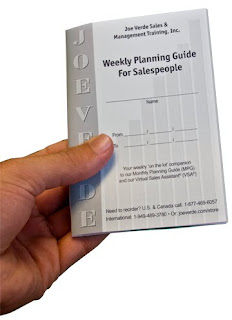 EZ-Guide To Help Salespeople Organize
Their Day
Orange County, CA. – March 24, 2011 – There is nothing more discouraging for most salespeople than working long hours, forgetting appointments and missing sales because of one simple reality: they struggle to organize and plan their daily activities. It is exactly for this reason Joe Verde created his new Weekly Planning Guide (WPG)
for salespeople.
“Here’s a reality check for salespeople,” said Verde. “If you don’t learn much about selling and just hang around, wait for an ‘up’ and wing it every day, you’ll end up putting in brutal hours, and selling cars will be one of the lowest paying, toughest, and most frustrating jobs you’ve ever had. But when you organize your day, you’ll immediately start selling more units and earning bigger paychecks and spend less time doing it.”
Verde said the WPG is easy-to-use because it was designed to fit into a shirt pocket and allows salespeople to quickly record prospect contact info, log sales and keep appointments. The WPG also serves as a weekly ‘on the lot’ companion to Joe Verde’s Monthly Planning Guide (MPG) and his Web-based automotive CRM, the Virtual Sales Assistant® (VSA®).
The VSA®, along with the MPG and now the WPG, are the result of the tried and proven methods Verde learned as a salesperson selling cars.
“I spent five years struggling to average eight units a month, quit, took two years off, then learned how to sell and manage my career in sales,” Verde said. “When I started selling cars again, I sold more units and earned more money in just seven months, than I had sold and earned in my first five years combined.” Verde added that the planning system he developed in those years – which ultimately became the VSA®, MPG and the new Weekly Planning Guide – was the key to his success selling cars.
To learn about Joe Verde’s virtual automotive sales training programs online, visit www.jvtn.com or call (800) 445-6217. For information about Joe Verde workshops and training products, visit the Web at www.joeverde.com.